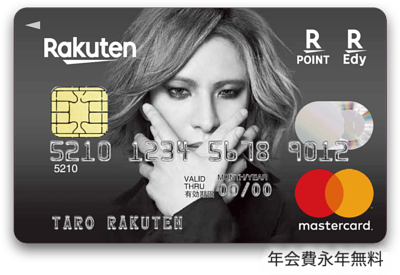 NEWS: YOSHIKI’S FINAL PERFORMANCE OF "ANNIVERSARY" IN THE HEISEI ERA

YOSHIKI gave a special performance of his composition “Anniversary” at the “Principal Gala 2019″ presented by the Asami Maki Ballet on March 16 and 17 in Tokyo.

“Anniversary” was composed in 1999 by YOSHIKI at the Emperor of Japan’s request to celebrate the 10th Anniversary of his reign. The 2019 performance marked the final time the song would be presented in the Heisei Era before Emperor Akihito abdicates the throne in April.

“I wish to go forward with hope into the next era while still looking back to the past,” YOSHIKI said. “As an artist, I want to continue making work that gives people hope.”

"YOSHIKI - Live at Carnegie Hall" features rock star and composer YOSHIKI as pianist joined by the Tokyo Philharmonic Orchestra, performing YOSHIKI's compositions which have sold over 50 million records worldwide. Program highlights include YOSHIKI's theme for the Golden Globes and his piano concerto composed for the Emperor of Japan's 10th Anniversary, along with selections from Beethoven and Tchaikovsky.

YOSHIKI creates the "S" pose (based on his famous "X" pose) for Bandai Namco's first anniversary campaign for the top-selling smartphone game THE iDOLM@STER: SHINY COLORS. "I'm also active in various ways as a producer, but I had an image of the world of idols as being at the opposite end of the spectrum," YOSHIKI said, "so when I received the offer, I was surprised but also happy, and it was a refreshing experience."​ 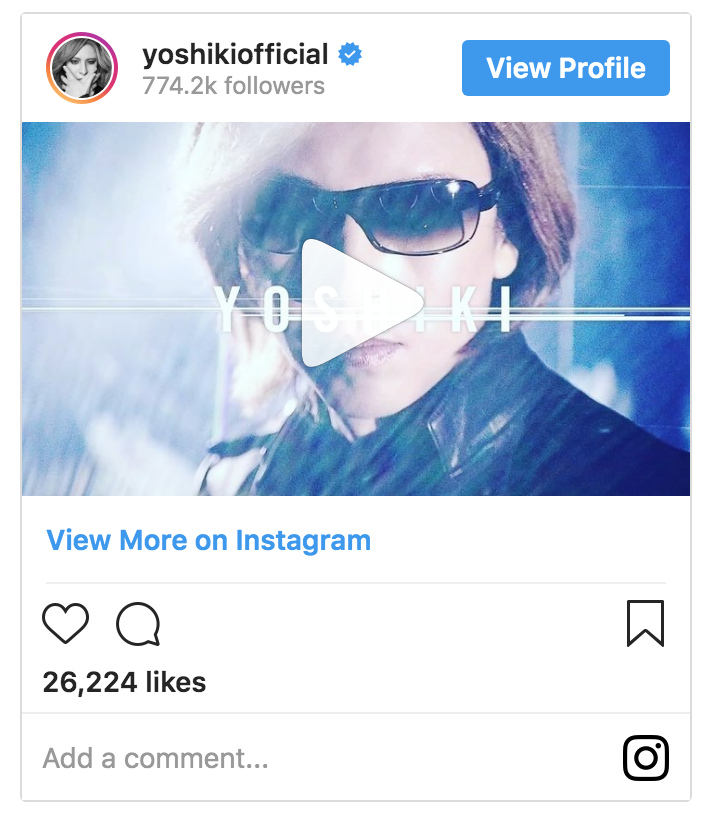 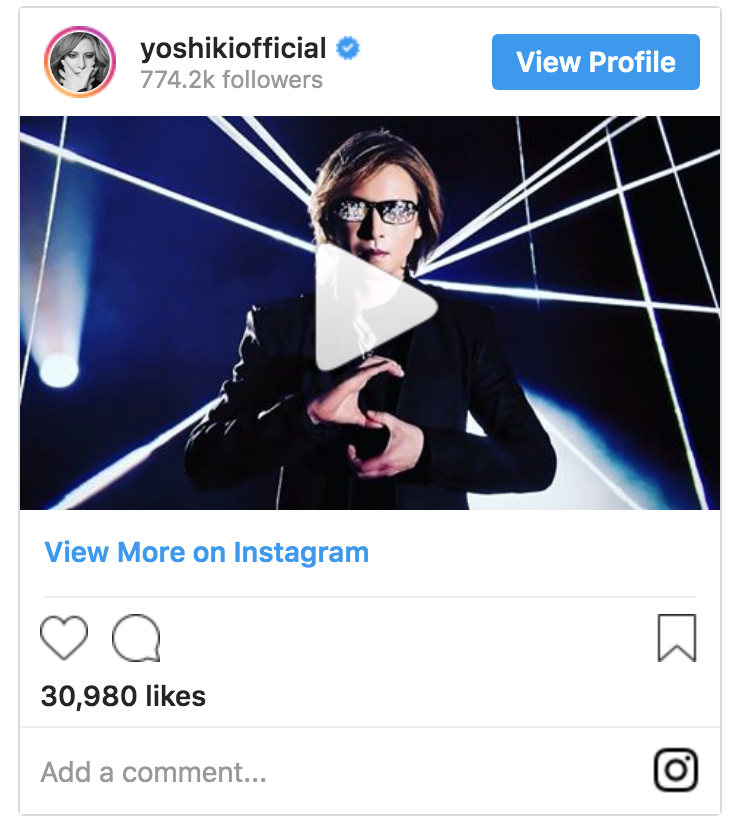 The results of the 2019 Sanrio Character Ranking were announced on June 4, and Yoshikitty ranked 3rd place in China and 8th in the overall worldwide ranking, making it into the top 10 for four consecutive years.

Yoshikitty was created through a collaboration between YOSHIKI of X JAPAN and Hello Kitty, and the popular character reached its 10th anniversary this year. In last year's voting, Yoshikitty won 3rd place worldwide and achieved 1st place in China, Italy, Germany, and France, 2nd place in South Korea and Brazil, and 3rd place in Great Britain.​

After hearing that his close friend, Korean-born Hollywood actor Lee Byung-hun, had donated 100 million won to the affected area, YOSHIKI felt moved and also decided to donate in order to help those suffering from the disaster.

“I was moved when my close friend Mr. Lee Byung-hun made a donation, and I was
inspired by our international friendship," said YOSHIKI. "I wanted to help those people suffering from the disaster, and I pray from the bottom of my heart that they can recover as soon as possible.”

NEWS: EVENING/BREAKFAST WITH YOSHIKI 2019 IN TOKYO​

Thank you for your inspiration for helping those who were affected by the disaster. You are a great friend. @byunghun0712 Praying for the victims and their families of the Sokcho wildfire. YOSHIKI

NEWS: YOSHIKI'S PERFORMANCE OF "ANNIVERSARY" AND "ENDLESS RAIN ON NHK'S SONGS OF TOKYO

YOSHIKI will give special performances of "Anniversary" and "Endless Rain" with orchestra on NHK's "SONGS OF TOKYO" April 22, 2019, followed by an exclusive interview with host Shingo Murakami (Kanjani∞). YOSHIKI will discuss his personal and musical challenges since making his major debut 30 years ago with X JAPAN in 1989, the first year of the Heisei era. This will be the first original full-size TV debut of "Anniversary", composed by YOSHIKI to commemorate the 10th anniversary of the Emperor's reign, which was first performed during a national ceremony held in the Imperial Palace Plaza in 1999. 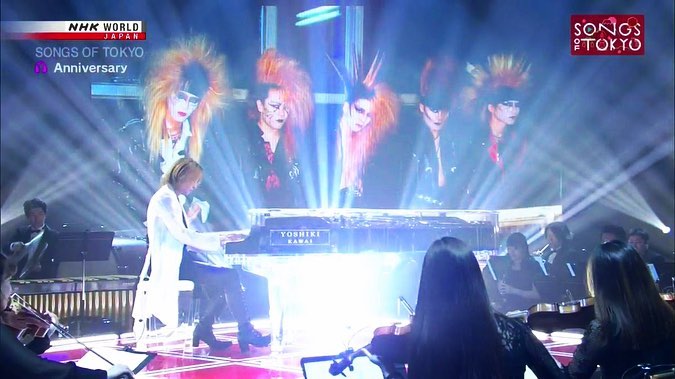 Exclusive interview with YOSHIKI in the June Issue of men's fashion and style magazine GOETHE. "The man and watch that defy conventional wisdom."

YOSHIKI, who continues to defy conventional wisdom in the music industry across multiple genres, passionately discusses his unprecedented 12 dinner show performances scheduled for August 2019, as well as his special love for watches and his resolutions for the new Reiwa era. (Photos by Junji Hata)

NEWS: NEWSWEEK JAPAN NAMES YOSHIKI ONE OF 100 JAPANESE PEOPLE TRUSTED BY THE WORLD 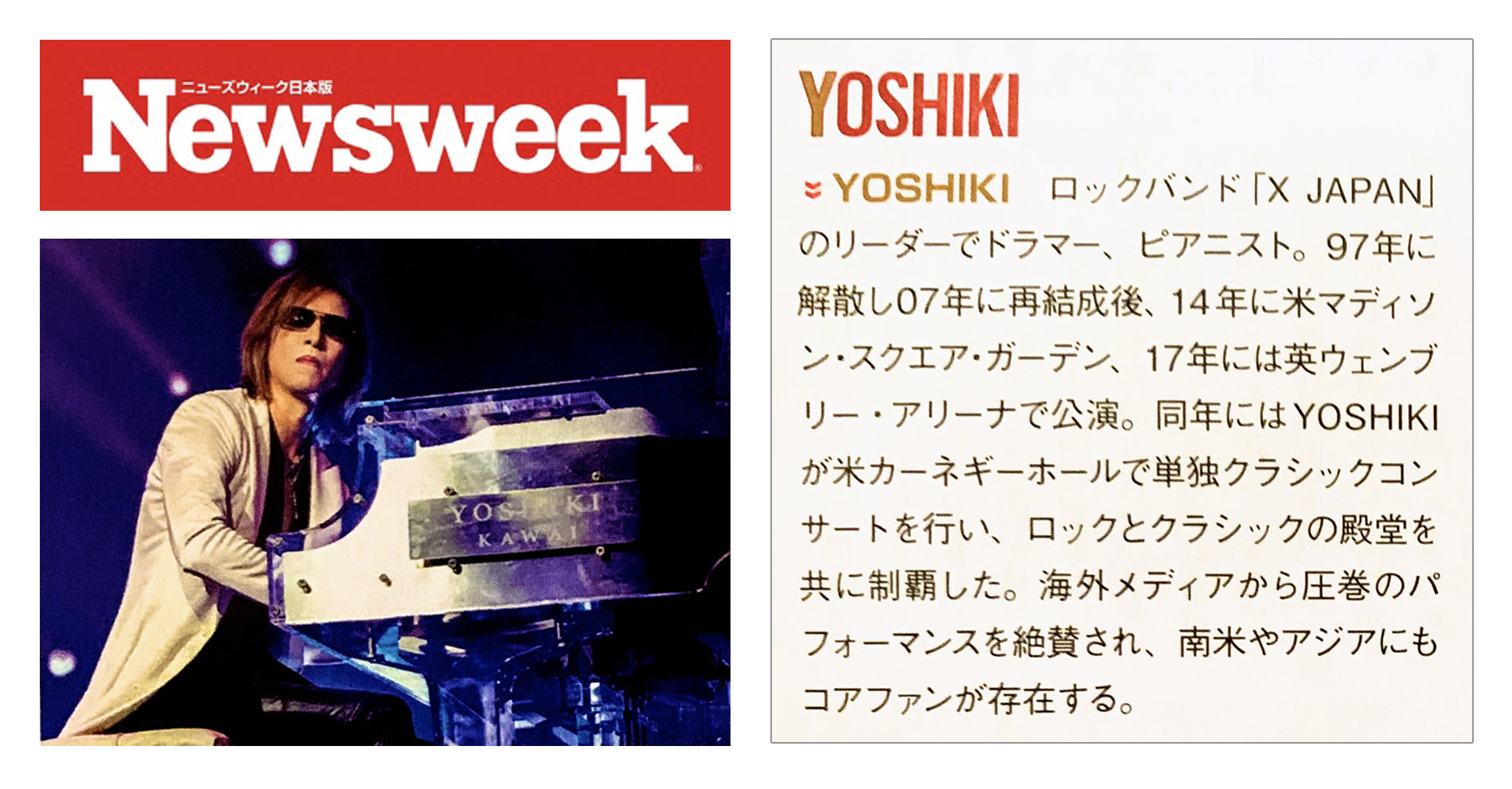 Newsweek Japan: "YOSHIKI is the leader of rock band X JAPAN, a drummer, and a pianist. The band once dissolved in 1997, but since reuniting in 2007, they have performed at Madison Square Garden in the U.S. in 2014, and at Wembley Arena in the U.K. in 2017. YOSHIKI also played a solo classical concert the same year at Carnegie Hall in the U.S., conquering the world of rock and classical music simultaneously. His phenomenal performances have been acclaimed by media outlets worldwide, and his hard core fans are widespread in areas such as South America and Asia." 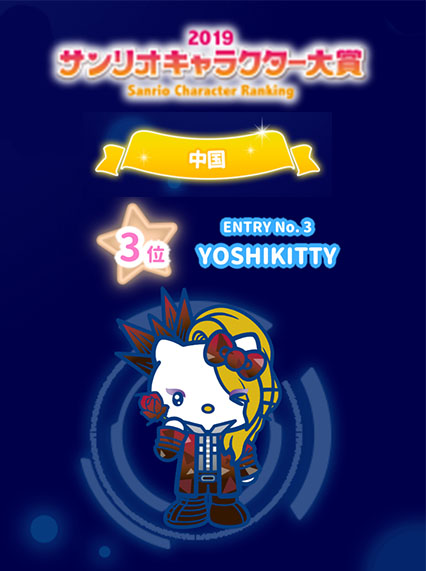 The 6th Anniversary YOSHIKI Premium Dinner Shows have sold out, with ticket applications soaring to as high as 260 times the number of available seats. This summer, a record 12 shows in 7 days were scheduled in an effort to meet the intense demand for one of Japan's most prestigious concert events, which have increased in number and scale every year since they began six years ago.

"I usually don't like summer because I'm a nocturnal creature who dislikes the sun and heat," said YOSHIKI. "But ever since I started this show several years ago, I started to look forward to this season. I'm truly grateful to all my fans who support me. I wish I could have adjusted my schedule to make room for more than 12 shows, but this is the best I can do at this time. I'm looking forward to seeing you all." 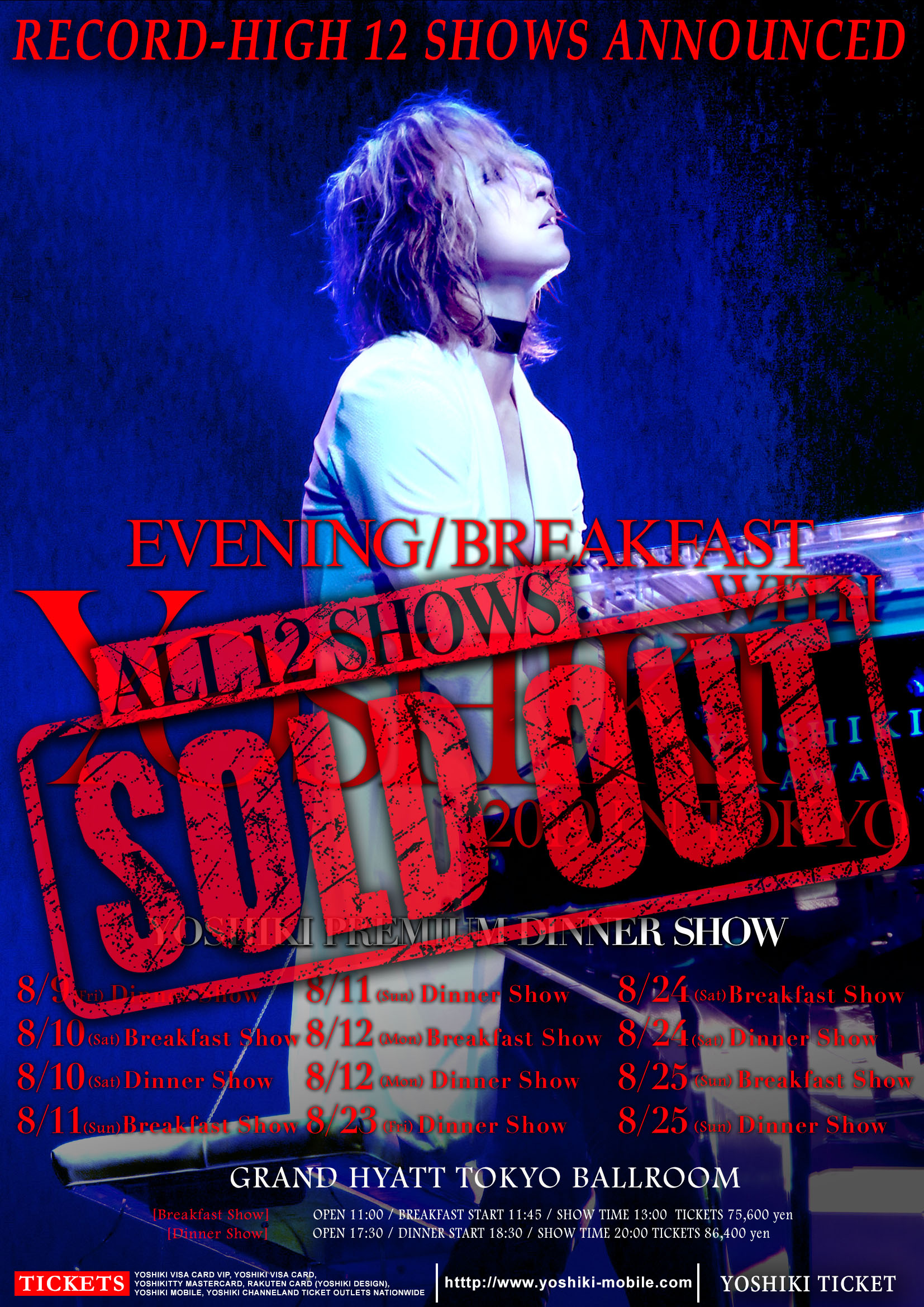 YOSHIKI made a special appearance on the red carpet for the X-Men: Dark Phoenix world premiere at Hollywood's Chinese Theatre on June 4, 2019 along with the film's stars James McAvoy, Michael Fassbender, Sophie Turner, and Oscar-winning actress Jennifer Lawrence.

"Play every concert as if it is your last."

Yoshiki made a rare appearance at the Frost School of Music at the University of Miami, to present the school with a donation of $150K on behalf of his non-profit 501(c)(3) organization Yoshiki Foundation America, and Dean Shelton Berg’s office suite was officially renamed in Yoshiki’s honor. The presentation was attended by a host of dignitaries from the school and the Consulate of Japan in Miami. Yoshiki also conducted a Master Class with students and Yoshiki’s fans hosted by Shelly Berg, with whom he has collaborated on several projects including the Golden Globe Awards theme and Yoshiki's sold-out Carnegie Hall performances. 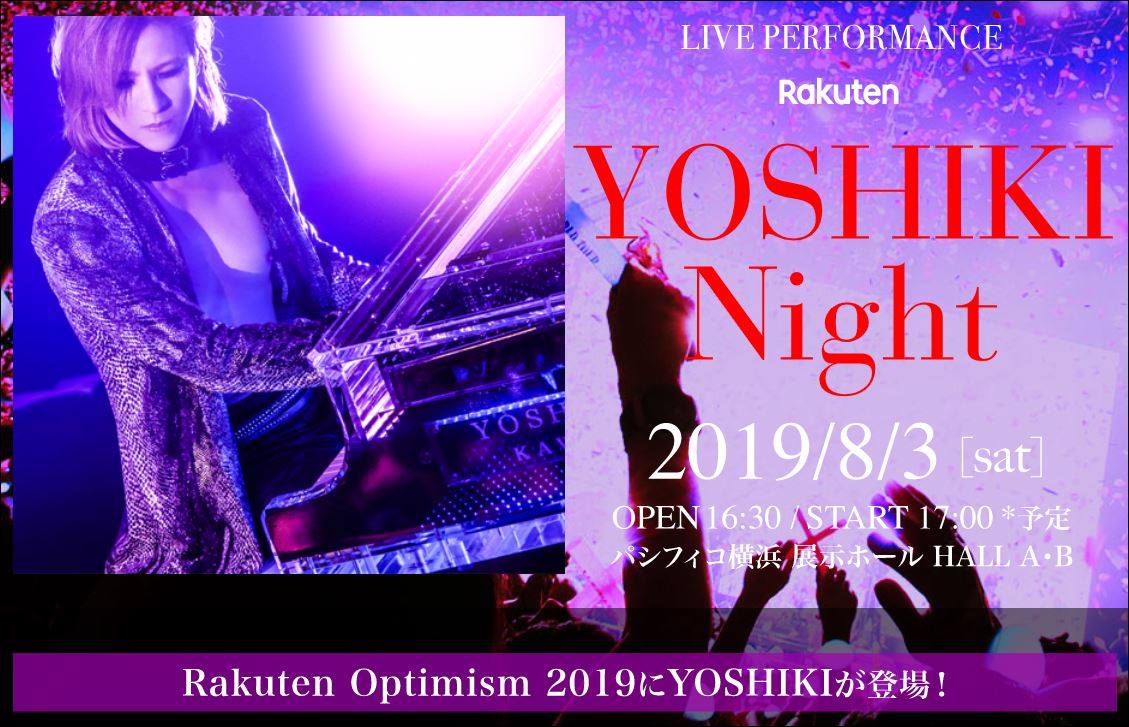