Join me! I’m performing at the Grand Opening Celebration of #JapanHouseLA at #Hollywood & Highland on August 24. Details: http://bit.ly/YoshikiJapanHouseLA 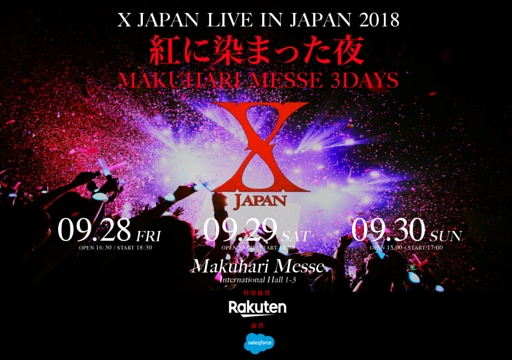 YOSHIKI spoke to the Foreign Correspondents' Club of Japan on September 13 to reveal news about collaborating with Sarah Brightman in Germany, his upcoming YOSHIKI CLASSICAL 2018 performances at Tokyo International Forum, X Japan's first studio album in 21 years, upcoming concerts at Makuhari Messe, and the progress of We Are X around the world.​

Upon receiving the news of the large scale damage caused by the Hokkaido earthquake on September 6, which brought more destruction to Japan following Typhoon Jebi two days earlier on September 4, YOSHIKI posted a message of support on his .

Donations to the Japanese Red Cross Society Heisei 30 Hokkaido Eastern Iburi Earthquake Relief Fund can be made at: http://www.jrc.or.jp/contribute/help/308/

YOSHIKI to Perform "MIRACLE" with Sarah Brightman in Germany 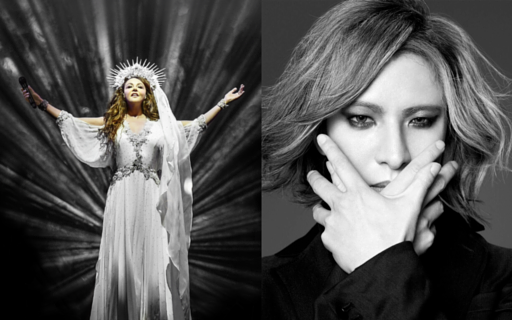 YOSHIKI was invited by Brightman to collaborate on "Miracle" for the new album, placing YOSHIKI in the company of her distinguished list of past musical collaborators, including Andrew Lloyd Webber and Ennio Morricone.

YOSHIKI will join Brightman for a special TV performance and cinema taping at Festspielhaus Füssen, one of Europe's most modern musical theaters, Friday, September 21, in Germany.

Preview "Miracle" by YOSHIKI and Sarah Brightman on iTunes now!

With concern for the safety of fans as their top priority, X JAPAN announced that tickets for all 33,000 people would be refunded but the band would perform an unprecedented large-scale “closed-door concert” with complete stage effects and crew for the scheduled live broadcast on WOWOW that night.

When the announcement was made in the early afternoon, thousands of fans who had arrived early at the venue screamed in shock, many having traveled from overseas to join the 100,000 who’d gathered from September 28-30 for X JAPAN’s largest live concerts in 8 years.

In response to fan outcry, the decision was made to perform the concert in its entirety inside the massive venue so fans could watch safely at home, with the international crew from Japan, the United States, the United Kingdom, and numerous other countries adding their talents to the effort. In addition, YOSHIKI made arrangements for the whole production to stream on Nico Video’s YOSHIKI CHANNEL.

YOSHIKI expressed his hopes for the safety of the fans and their families on his Instagram account  before the start of the extraordinary performance. The concert is currently available on demand on WOWOW and YOSHIKI CHANNEL in Japan.

Members of YOSHIKI CHANNEL  can watch it until Sunday Oct 7 11:59pm JP time! 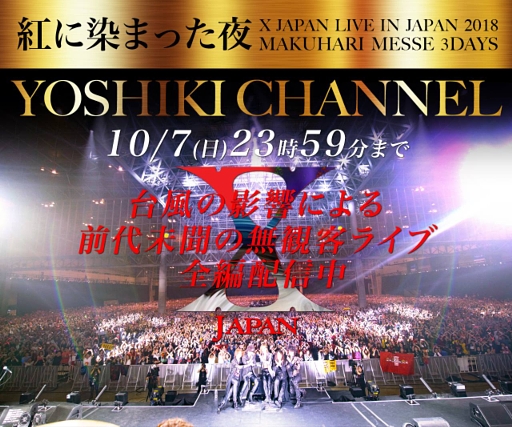 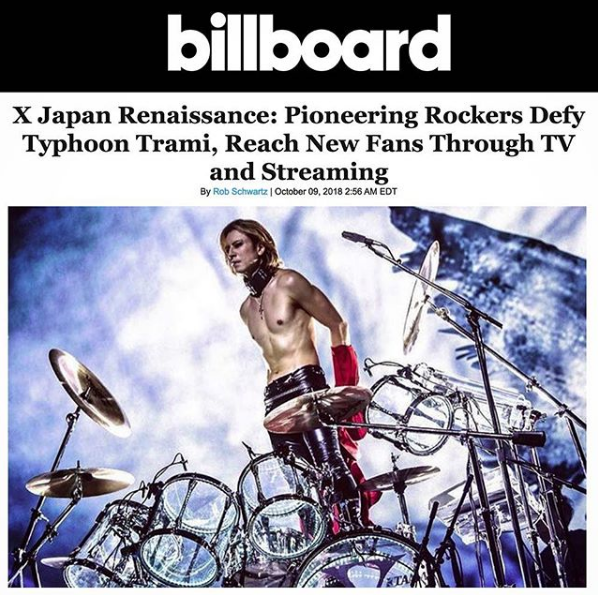 For the first time ever, YOSHIKI will live stream his concert worldwide to international fans via Yoshiki Channel International (on YouTube for fans outside of Japan), YOSHIKI CHANNEL (Japan), and WOWOW (Japan). The November 15th concert will be broadcast in its entirety along with special bonus content from the November 12th show featuring Sarah Brightman.

On October 11, YOSHIKI was invited as the special guest for the pre-opening event for YSL BEAUTY HOTEL -- the Yves Saint Laurent event which began in Paris and has expanded to major cities like New York and now Tokyo.

Yves Saint Laurent's global beauty director Tom Pecheux -- who has been in charge of makeup for a number of hugely successful global celebrities such as Kate Moss, Lady Gaga, Madonna, and Beyoncé -- traveled to Japan for the event to personally do YOSHIKI's make up in front of the audience and reporters.

The selection of a Japanese rock star like YOSHIKI was a big surprise that generated a large amount of attention in Japan and worldwide, once again placing YOSHIKI at the leading edge of fashion, following his appearance as the first male model on the cover of Vogue Japan. 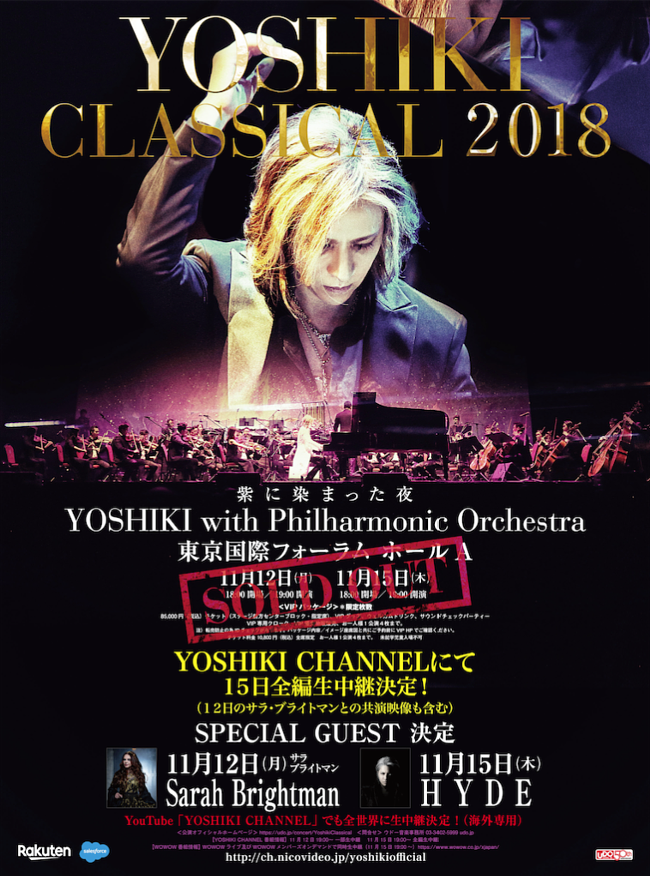 The special-edition digital single of Sarah Brightman's performance of "Miracle" – composed by YOSHIKI with a new arrangement for her recently-released album HYMN – is now available worldwide, with two exclusive bonus tracks.

Superstar soprano Brightman made the announcement on November 12 in Tokyo, just hours before joining YOSHIKI on stage for the first of his sold out YOSHIKI CLASSICAL 2018 concerts at the Tokyo International Forum. Earlier this year, YOSHIKI was invited by Brightman to perform "Miracle" on the new album, placing YOSHIKI in the company of her distinguished list of past musical collaborators, including Andrew Lloyd Webber and Ennio Morricone.

Composed and arranged by YOSHIKI, Performed by Sarah Brightman and YOSHIKI​

The final, sold-out performance of YOSHIKI CLASSICAL 2018 〜Two Violet Nights〜 YOSHIKI with Philharmonic Orchestra was broadcast worldwide from the Tokyo International Forum on November 15, 2018. In front an audience of nearly 5000 people, YOSHIKI and HYDE performed the Attack on Titan theme song "Red Swan" (written by YOSHIKI), which had achieved #1 on iTunes charts in 14 countries .

The performance was viewed live by thousands more fans worldwide on Yoshiki Channel (Japan) and Yoshiki Channel International (outside Japan), just one day after the announcement that YOSHIKI and HYDE would perform together at the prestigious New Year's Eve television event, NHK's 69th Kouhaku Uta Gassen.

As the audience gave thunderous applause for the performance, YOSHIKI revealed that he was already planning something special for their year-end performance. HYDE added, "'Red Swan' is a piece of music that conveys such powerful meaning in the lyrics." YOSHIKI was moved by his friend's words and replied, "Thank you for giving such wonderful life to this piece." 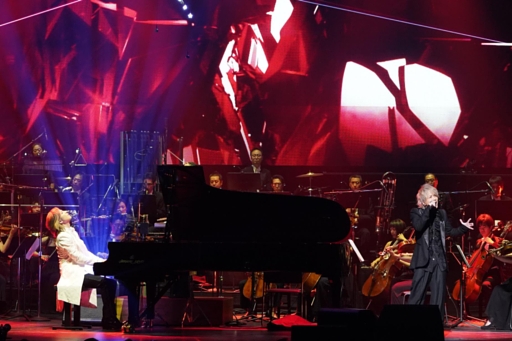 Sarah Brightman has announced that YOSHIKI will join her live on stage for selected dates of her 2019 HYMN world tour, including concerts at New York's Radio City Music Hall, the Dolby Theater in Hollywood, The Masonic in San Francisco, and Yokohama Arena in Japan.

The digital single of "Miracle" – composed by YOSHIKI, performed by Sarah Brightman featuring YOSHIKI's performance on piano – was released worldwide  on November 16, reaching the Top 10 on iTunes Classical Charts in 15 countries, including #1 in Mexico, Singapore, and Japan, #2 in Brazil, and #5 in the USA and Germany. 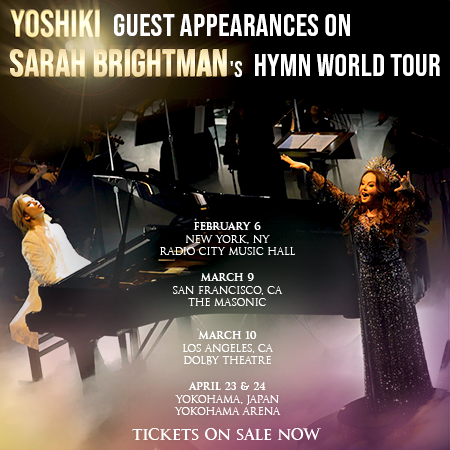 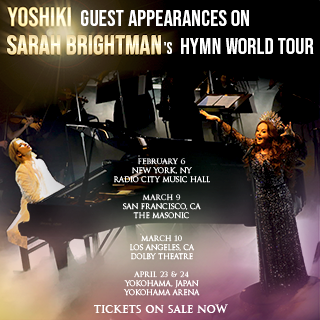 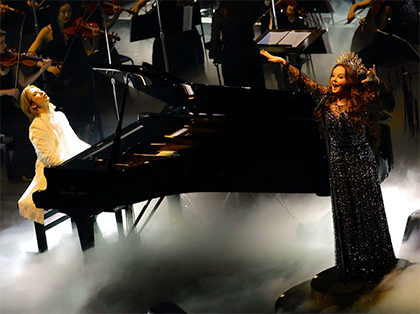 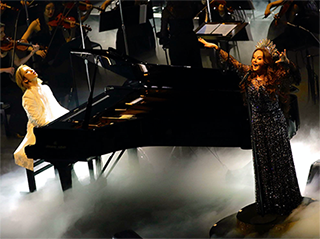 (UPDATE: SOLD OUT) In 2008, YOSHIKI began the "Y by Yoshiki" project with fourth-generation winemaker Rob Mondavi, Jr., in the famous wine-producing region of Napa Valley, California. To commemorate the 10th anniversary of the successful wine brand, YOSHIKI and Mondavi produced the limited edition 2018 Oakville vintage, using only grapes from the renowned Oakville region of Napa Valley.

Crafted with passion and precision over the past 10 years, YOSHIKI calls this edition of his wine "the greatest masterpiece". Released in Japan on December 26, 2018, "Y by Yoshiki" embodies the style of Bordeaux red wines that express their complex taste through the blending of multiple varieties of grape. Made by exclusively using 100% high-quality Cabernet Sauvignon grapes cultivated in Oakville, then aged slowly in French oak barrels, "Y by Yoshiki" carries a mellow aroma and full-bodied, complex taste which expresses the same first-rate artistry as YOSHIKI.

On New Year's Eve 2018, YOSHIKI made Japanese television history with his dual performance on the "69th NHK Kohaku Uta Gassen," the last of the Heisei Era, by performing for both opposing Red and White teams during the top-rated broadcast. YOSHIKI wore white to plays drums for the Attack on Titan theme "Red Swan" with HYDE and SUGIZO, and then switched clothing on stage to wear red for his piano performance of "Miracle" with Sarah Brightman, creating a nationwide buzz that made YOSHIKI the number one trending topic on Twitter.​

YOSHIKI was swarmed by reporters when he appeared at the Hollywood red carpet event for the Short Shorts Film Festival & Asia (SSFF & Asia) Film Festival on January 17, 2019, presented by Japan House and the Consulate General of Japan in Los Angeles. YOSHIKI serves as an advisor for the Japan House organization and performed a special concert for the venue's grand opening in August 2018.

Returning to Hollywood's famous Chinese Theater where We Are X made its U.S. theatrical premiere, YOSHIKI responded to media questions about his Hollywood-related plans, and hinted at a new film announcement next week (view on Instagram).

In addition, YOSHIKI will be working on the theme song and music for the animated feature, Spycies, an action spy comedy produced by Chinese entertainment giant iQiyi, animated in France by Lux Populi Production. Spycies will be released in theaters across China on August 8th, 2019.

“YOSHIKI is a great friend of ours at THC and we are incredibly proud to be working with such a talent on two movies which are both global in scope,” said The H Collective CEO Nic Crawley. “Spycies brings together talent from the US, Japan, China and France.” 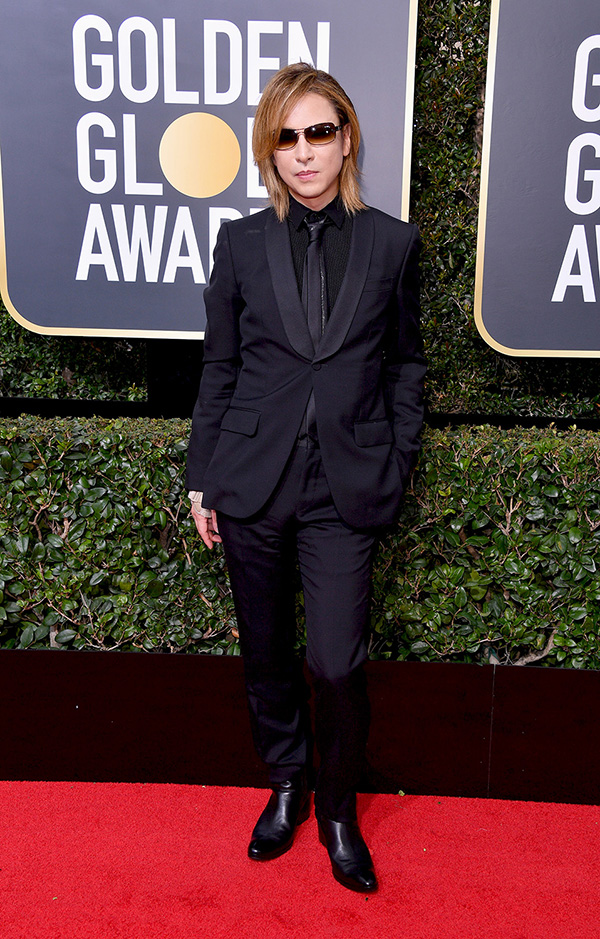 YOSHIKI will make a special guest appearance on stage at choreographer Asami Maki's Principal Gala 2019 ballet concert on March 16 and 17.

Dancers from the Asami Maki Ballet have previously appeared as guests during the EVENING WITH YOSHIKI 2018 and YOSHIKI CLASSICAL 2018 concerts for elegant performances of "Forever Love" and "Swan Lake". Accepting Maki's request to perform the "Anniversary" as part of the concerts' tribute to His Majesty the Emperor's abdication in 2019, YOSHIKI will return to Japan just for this unforgettable performance. 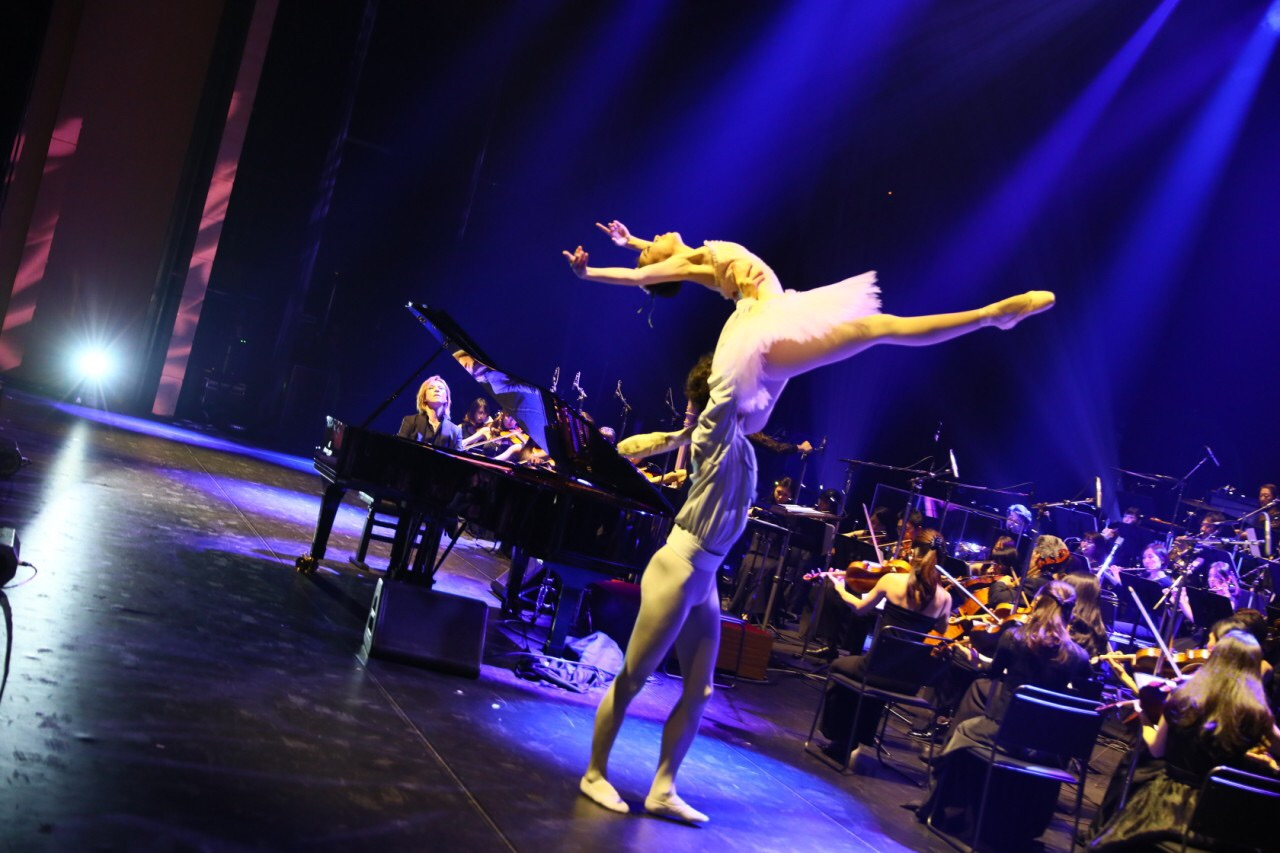