X JAPAN - BORN TO BE FREE

NEWS: Check out the new video for "BORN TO BE FREE" !

NEWS: Tune into Yoshiki Channel to see Yoshiki’s live performance on January 22nd at 9pm MST (8pm PST/11pm EST) during the “We Are X” Event at Sundance! 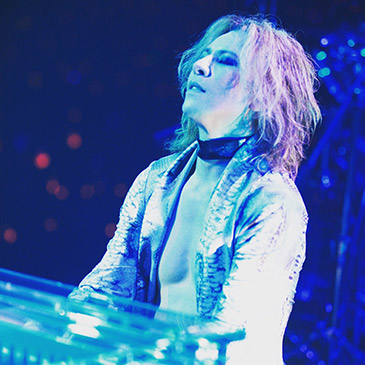 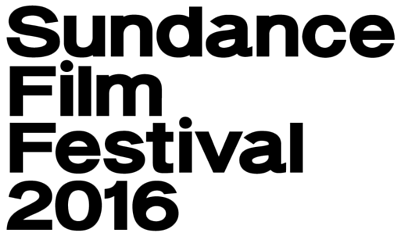 NEWS: X Japan's New Single "Born To Be Free" is out now! Already hitting TOP 10 in over 10 countries! 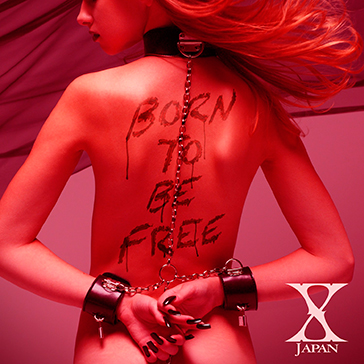 The song, which the band has performed live to sold out shows around the world​ ​over the years, has never before been released as a studio recording. The new studio recording of the​ ​song will appear on X JAPAN’s upcoming new album, which will be released worldwide on March 11,​ ​2016. 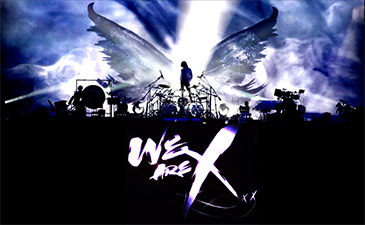 NEWS: We Are X Documentary Film To Make Its World Premiere at 2016 Sundance Film Festival

The film We Are X, directed by Stephen Kijak (Stones In Exile, Scott Walker – 30 Century Man, Backstreet Boys: Show ‘Em What You’re Made Of) and produced by John Battsek’s UK-based Passion Pictures, producers of the Oscar-winning One Day in Septemberand Searching For Sugar Man, will make its world premiere in th​e​ World Cinema Documentary Competition at the 2016 Sundance Film Festival. We Are X is a feature documentary about X Japan and its singular three decade-long evolution. The premiere marks the first time that a Japanese rock band has been the focus of a film to play in competition at the World Cinema documentary category. The 2016 Sundance Film Festival takes place January 21-31 in Park City, Utah.
SUNDANCE > 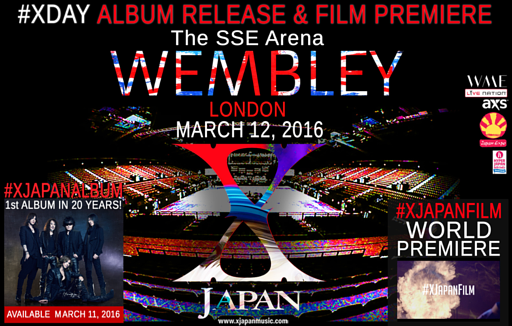 NEWS: Meet Yoshiki Backstage at His Concert on March 12 in London, Plus Concert Tickets and Soundcheck Party Access 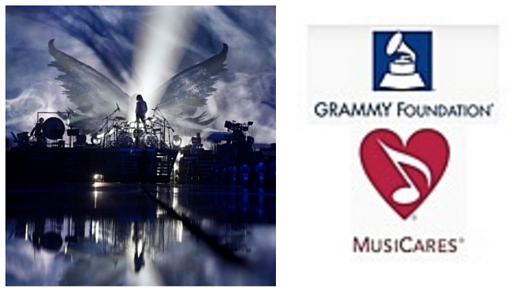 Yoshiki Foundation is offering a lucky fan and their guest the chance to an exclusive, intimate one on one conversation with Yoshiki backstage after his upcoming UK concert at SSE Arena, Wembley on March 12, 2016.
AUCTION CLOSING BID: USD19,550.00
Proceeds from this item will benefit MusiCares®.
GO TO AUCTION​

ARTICLE: X Japan Raises Over $200,000 for Tsunami Charity; All Shows Sold Out! 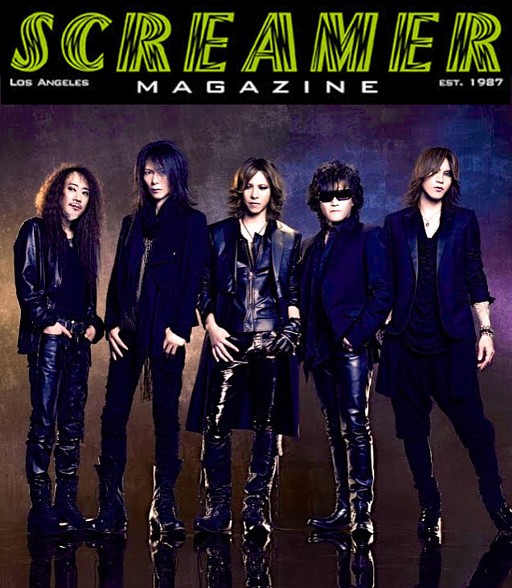 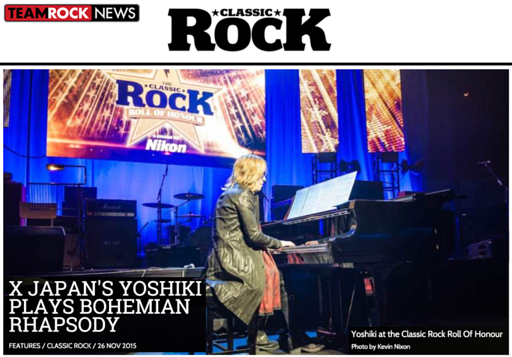 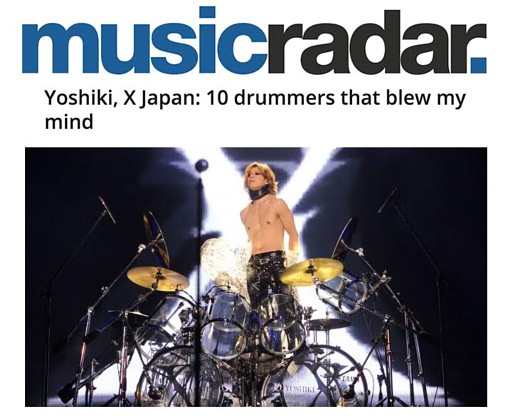 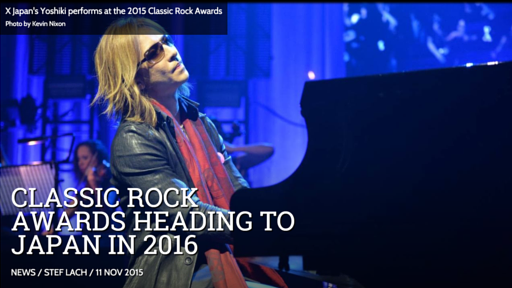 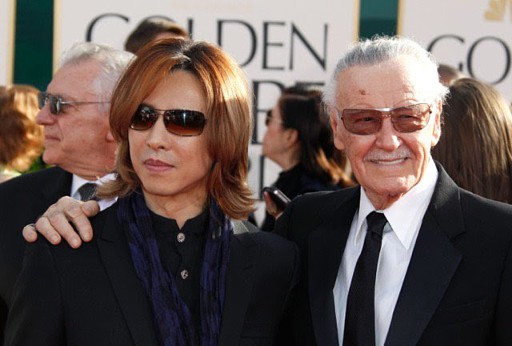 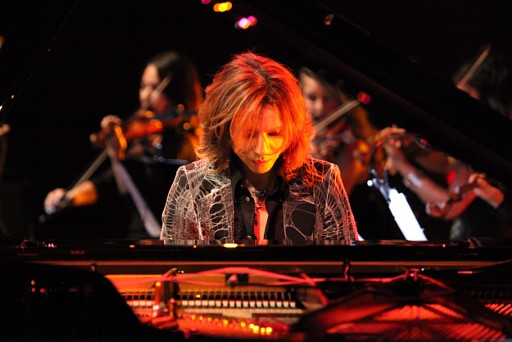 Miss International, one of the world’s largest pageants, has partnered with Yoshiki to host a charity gala on Oct 23, 2015 in an effort to spread the message of world peace. Proceeds from an auction held at the gala will be donated to the Office of the United Nations High Commissioner for Refugees (UNHCR) through Yoshiki Foundation America.
Yoshiki will auction off stage costumes, a kimono from YOSHIKIMONO (designed by Yoshiki) and a backstage meet-and-greet with Yoshiki on the upcoming X JAPAN JAPAN TOUR. For further details visit

X Japan kicks off their Japan tour in Ishinomaki.

X Japan begins their Japan tour in Ishinomaki, honoring Yoshiki’s promise back in September 2013 to return to the city and perform a charity concert.

Only 150 tickets are available for this intimate show with proceeds going to Central Community Chest of Japan.

75 tickets will be auctioned on Yahoo! Japan while the other 75 tickets will remain free for residents in Ishinomaki, Higashimatsuyama, and Onagawa. Residents of these cities can enter to win a ticket on the Yahoo! Japan auction site.
The Auction has started! Visit the auction site HERE to place your bid.
VENUE LINK
Dec 2,3,4 Yokohama Arena —> SOLD OUT
Dec. 14 Nagoya Gaishi Hall —> SOLD OUT
Additional tour dates released: Yokohama Arena on Dec 1st and Nagoya Gaishi Hall on Dec 15th.
A Full Tour Schedule 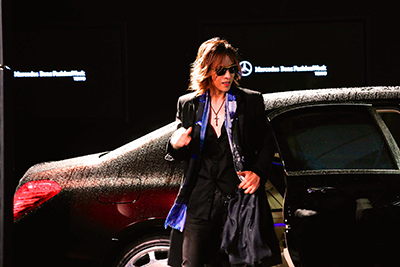 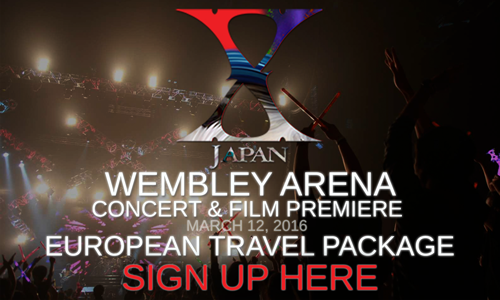 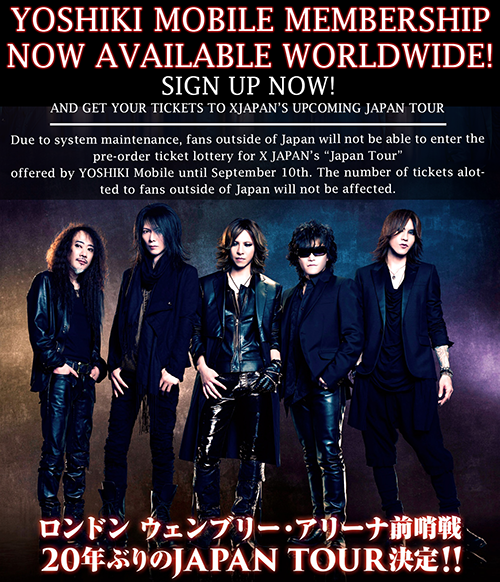 NEWS: YOU CAN JOIN YOSHIKI CHANNEL HERE (JAPAN ONLY)

NEWS: YOU CAN JOIN YOSHIKI CHANNEL HERE (JAPAN ONLY) 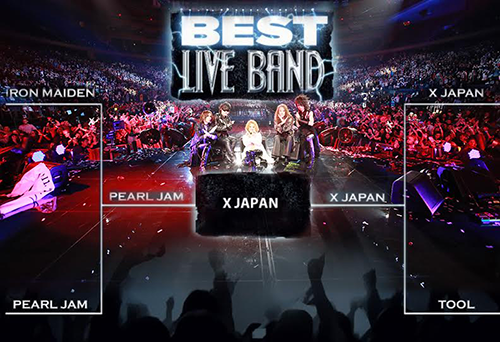 NEWS: All 3 shows are SOLD OUT before tickets went public!

NEWS: GRAMMY.COM LOOKS BACK AT THE BEST OF 2014 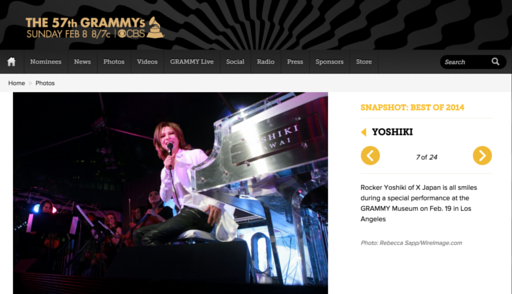 NEWS: Dear X Japan fans. Congrats! YOU WON the Most Devoted Fans Award! We Are X!!! 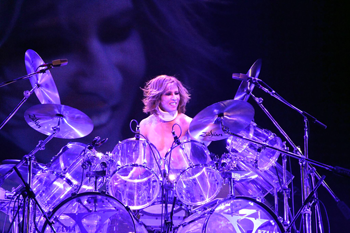 LOS ANGELES, CA, DECEMBER 10, 2014 – Yoshiki has partnered with the Grammy Foundation® and MusiCares® to participate in the second annual Charitybuzz VIP experience auction. Yoshiki’s VIP fan experience was originally to be awarded to just one bidder, but in an effort to maximize fundraising and recognize the generosity of his fans, he ultimately decided to award the two highest bidders. They each won an individual, private dinner with Yoshiki and helped raise a record $62,000 for the GRAMMY Foundation and MusiCares. Yoshiki’s VIP fan experience was part of an incredible range of artists who participated including, Taylor Swift, Carrie Underwood and Hunter Hayes all to benefit programs and services of the GRAMMY Foundation and MusiCares.

30 years after forming in a suburb of Tokyo, the kings of Japanese glam rock are finally ready to take Madison Square Garden

"We have too much drama..."
ROLLING STONE

There was Yoshiki, principal songwriter, brutalizing percussionist and virtuosic pianist of X Japan, standing on his drum throne, casting a shadow that was, via the jumbotron behind him, framed with fluttering, demonic wings, like the final boss in a video game. The technical exactitude that allowed that moment to happen -- planning where and how the star would stand, and illustrating the projections to match it exactly -- were in full supply at the band's much-advertised return to New York at Madison Square Garden on Saturday (Oct. 11)...
BILLBOARD 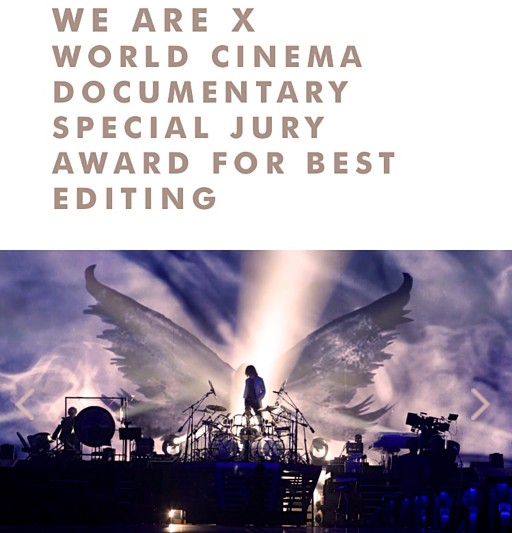 Due to completely unforeseen circumstances, X JAPAN have announced that their show at SSE Arena Wembley, scheduled for March 12, 2016, has now been postponed to March 4, 2017. All original tickets sold will be honored at the new 2017 date.

PATA (guitarist) was admitted to the ICU at a hospital in Tokyo on January 15, 2016. He was diagnosed with a life-threatening condition, which included a severe blood clot. He recently came out of the ICU and his condition has thankfully stabilized, however his doctors do not consider him fit to fly until he has made a full recovery.

After much discussion, X JAPAN has announced a suspension of their current performance commitments, which include the Wembley show. Given the unfortunate circumstances, the release of X JAPAN’s new album, scheduled for a March 11, 2016 has also been postponed. Expect a rescheduled worldwide release date for their as-yet-untitled new album to be announced soon. 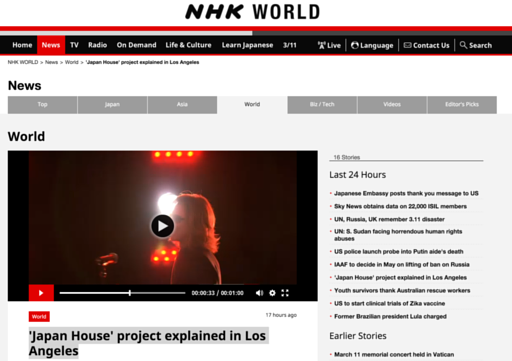 NEWS: Yoshiki to donate his special drum set for a charity auction as a 5-Year Commemoration of 3.11 Japan Earthquake and Tsunami 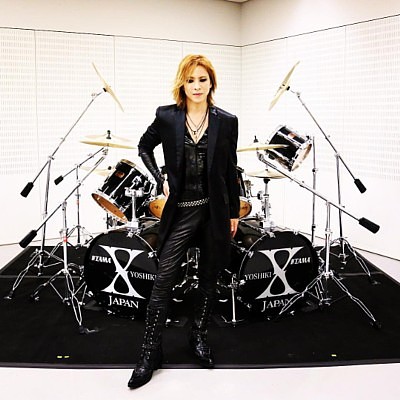 Yoshiki was invited as a  guest speaker at the New Economy Summit on April 7, 2016 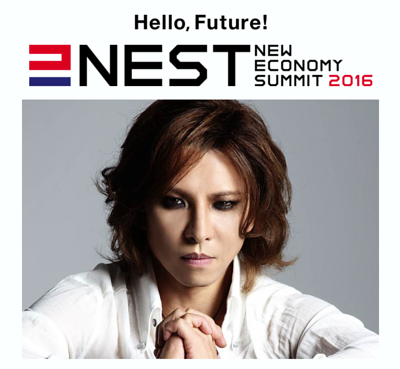